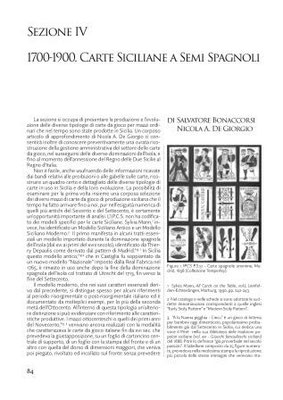 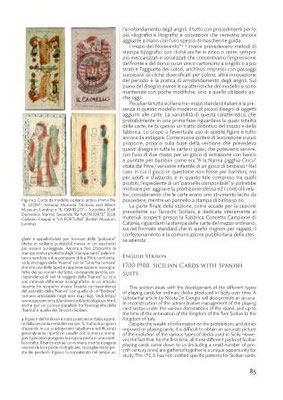 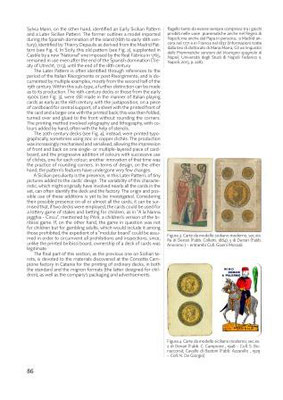 This section deals with the development of the different types of playing cards for ordinary decks produced in Sicily over time. A substantial article by Nicola De Giorgio will also provide an accurate reconstruction of the administrative management of the playing card sector under the various dominations of the island, and up to the time of the annexation of the Kingdom of the Two Sicilies to the

Despite the wealth of information on the prohibitions and duties imposed on playing cards, it is difficult to obtain an accurate picture of the evolution of the various types of decks used in Sicily. However, the fact that, for the first time, all these different packs of Sicilian playing cards come down to us (including a small number of pre-17th century ones) are gathered together is a unique opportunity for study. The I.P.C.S. has not codified specific patterns for Sicilian cards.

Sylvia Mann, on the other hand, identified an Early Sicilian Pattern and a Later Sicilian Pattern. The former outlines a model imported during the Spanish domination of the island (16th to early 18th century), identified by Thierry Depaulis as derived from the Madrid Pattern (see Fig. 1). In Sicily, this old pattern (see Fig. 2), supplanted in Castile by a new "National" one imposed by the Real Fábrica in 1765,

The Later Pattern is often identified through references to the period of the Italian Risorgimento or post-Risorgimento, and is documented by multiple examples, mostly from the second half of the 19th century. Within this sub-type, a further distinction can be made as to its production. The 19th-century decks or those from the early 1900s (see Fig. 3), were still made in the manner of Italian playing cards as early as the 16th century, with the juxtaposition, on a piece of cardboard for central support, of a sheet with the printed front of the card and a larger one with the printed back; this was then folded, turned over and glued to the front without rounding the corners.

The printing method involved xylography and lithography, with colours added by hand, often with the help of stencils.

The 20th-century decks (see Fig. 4), instead, were printed typographically, sometimes using zinc or copper clichés. The production was increasingly mechanised and serialised, allowing the impression of front and back on one single- or multiple-layered piece of cardboard, and the progressive addition of colours with successive use of clichés, one for each colour; another innovation of that time was the practice of rounding corners. In terms of design, on the other hand, the pattern's features have undergone very few changes.

A Sicilian peculiarity is the presence, in this Later Pattern, of tiny pictures added to the cards' design. The variability of this characteristic, which might originally have involved nearly all the cards in the set, can often identify the deck and the factory. The origin and possible use of these additions is yet to be investigated. Considering their possible presence on all or almost all the cards, it can be surmised that, if two decks were employed, the cards could be used for a lottery game of stakes and betting for children, as in "A la Nanna pigghia - Cincu", mentioned by Pitré, a children's version of the biribissi game. If, on the other hand, the game in question was not for children but for gambling adults, which would include it among those prohibited, the expedient of a "modular board" could be assumed in order to circumvent all prohibitions and inspections, since, unlike the printed biribissi board, ownership of a deck of cards was legitimate.

The final part of this section, as the previous one on Sicilian tarots, is devoted to the materials discovered at the Concetta Campione factory in Catania for the printing of ordinary decks, in both the standard and the mignon formats (the latter designed for children), as well as the company's packaging and advertisements.